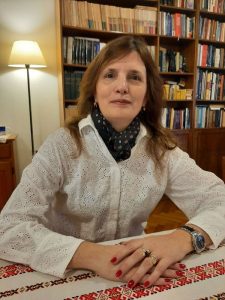 Adriana Ivana Smajic was born in the province of Santa Fe, in Argentina in 1973.

After high school, she studied and graduated law in 1995 at the National University of Rosario in the province of Santa Fe. In 1997, she completed her postgraduate studies in notary public at the same University.

She has been a court interpreter since 2005 and works in that profession as well. In addition to the legal documents she translates mainly for the Croatian citizenship procedure, she has also translated numerous professional texts as well as some literary works. In collaboration with Joza Vrljičak, she translated “Zlatarevo zlato” by Augusta Šenoe into Spanish, which is the first translation in that language.

Interprets simultaneously and consecutively during the main community meetings and visits of important guests from Croatia. She was hired as a translator by the Embassy of the Republic of Croatia in Santiago de Chile during the visit of Croatian President Zoran Milanović in 2022.

For a time, she held the position of secretary of the Inter-Social Committee of Croatian associations and institutions in Argentina.

Since 2015, he has been at the Head of the editorial board of the journal “Studia Croatica”, together with Joza Vrljičak, who has been the editor-in-chief since 1995.