An Olive tree in the Antofagasta Street in Split

Antofagasta Street was named in honor of the Sister Cities Split and the Chilean city of Antofagasta. Unfortunately, most of its residents do not know that one of the oldest and largest Croatian community lives in Antofagasta, Chile. In addition to the Croatian clubs, there is also the Sokol sports club, which was built with cement from Dalmacijacement, where the swimming pool is called Split. Numerous streets in Antofagasta bear the names of local Croats, and a monument was erected to Antonio Rendić Ivanović, a poet and doctor who did not charge the poor and is therefore in the process of beatification in the Vatican.
Milivoj Bratinčević, who has an office in that street and used to work in the Ministry of Immigration and Return, complained to me that mail often comes to him addressed to: Anto Fagasta and that they should draw attention to the fact that it is not about the first and last name. We thought it would be nice if our Mayor (then Andro Krstulović Opara) and the ambassador of the Republic of Chile (then Juan Luis Nilo) planted an olive tree in that street, as a symbol of peace, friendship, but also a symbol of the Dalmatians who went to Chile. This is why we founded the Initiative Committee in 2019, which was supposed to realize this idea, consisting of:
Juroslav Buljubasic, Honorary Consul of the Republic of Chile in Split
Branka Bezić Filipović, at that time head of the Croatian Heritage Foundation, branch of Split
Milivoj Bratinčević from the former Ministry of Immigration and Return, and now a member of the Croatian-Hispanic Society
Alen Jerkunica, dean of Aspira University, which has been holding Croatian language courses for Croats from South America for years
Davor Bučević, principal of Bol elementary school, which is twinned with the Republica de Croacia school from Punta Arenas

The Chilean ambassador Juan Luis Nilo accepted the proposal with satisfaction, and we also made informal agreements with the Municipality of Split and bought an olive tree. We ran into a small problem with arranging an appointment, so we planted the olive tree so that it wouldn’t fail, and then the Corona pandemic followed and everything stopped.

The olive tree has already grown, so we considered that this year is a special opportunity to bring the idea to life by placing a small written mark in the space, as this way we would have a permanent memorial commemorating the 30th anniversary of the establishment of diplomatic relations between the Republics of Croatia and Chile.
Namely, Chile was the first South American country to recognize the Republic of Croatia, which we can thank for the desire and strength of our emigrants.
This is a small way to thank for that, but also to conclude the programs marking this anniversary. 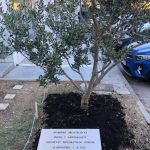 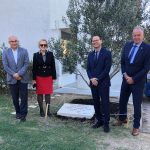 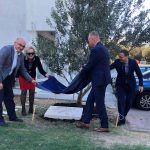 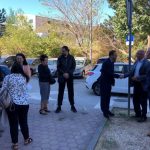