Croats in the Province of Santa Fe

The province of Santa Fe, located in Argentina’s interior, about 400 km from Buenos Aires, is estimated to be home to about 46,000 Croats. The landscape is dominated by pampa and is colloquially called Pampa Gringa due to many foreigners, mostly Italians, Spaniards, and Croats.

The capital Rosario, located on the Parana River, is the largest city in the Argentine province of Santa Fe, with its 1,200,000 inhabitants. The estimate is that about 30,000 Croats and their descendants live in the area, who gather in Croatian societies. Radio Bar Croata has been operating there for fifteen years and is watched on StreamYard all over South America and in other parts of the world. The hosts Javier Santich, Faustina Zarich, and Ivan Grbac work on familiarizing Croatian topics to their audience. 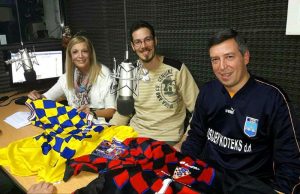 The Croatian language can be studied at the University of Rosario, and the department was opened thanks to the pioneering work of Maria Galian decades ago. She remembered those days: My children grew up and left, so I was on my own, and then said to myself: “I will teach the Croatian language.” So I started traveling to villages where there were Croatian communities. A couple of years passed when I heard that German, Italian, Russian, and a few other languages ​​were being taught at the university in Rosario. I decided that I would also teach Croatian there. After a year, I received a call and was told I could get this university position. I was thrilled. I asked for books from Croatia, and the Croatian Heritage Foundation sent books and dictionaries. I traveled to Croatia, where I met with President Stipe Mesic. He congratulated me and also advised me I would have a hard time getting paid for this. Despite that, I started teaching in 2005. I had 62 students during my first year; however, difficulties occurred. Everything went well until the students asked me to explain declension, and I did not know how to. I promised to do it next week. I contemplated what to do since I got myself into this. I cried with distress, did not sleep at night until I figured out how to explain everything to the students. In the end, I received an award from the Republic of Croatia for my work, and so I completed my job. 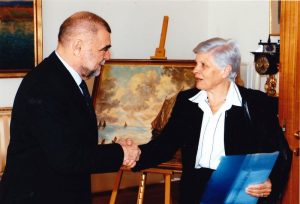 In Rosario, one can also study at the Juan Vucetich Institute of Criminology, named after Juan Vucetich, who originated from Hvar and is the founder of dactyloscopy or fingerprint identification.

One of the first Croats to come to Rosario was Matija Nikolorić from Bol. It was in 1812 when Rosario was still a tiny village. Nikolorić was the first post office owner, he was also the first to own a house with several floors, and he was elected mayor.

A square in Rosario is named Plaza Buratovich, after Major Buratovich. The monument of Zvonimir’s ship or La Nave de Zvonimir is in a visible place in the city, located in the park in front of the Flag Monument’s magnificent building. The ship is a small tugboat and built in 1902. The Italian owners ceded to raise a monument to the Croatian community and Argentina, a country that accepted many Croats. The monument was designed by architect Dražen Juraga, the then Honorary Consul of the Republic of Croatia in Rosario. Thanks to him and Alfred, and Domingo Kovačević, the idea was actualized. The grand opening was held on May 30, 1997. The plaque next to the ship, below Vladimir Nazor’s verses, was signed by the then Ambassador of the Republic of Croatia to Argentina Neda Rosandić Šarić and the Prefect Hermes Binner. 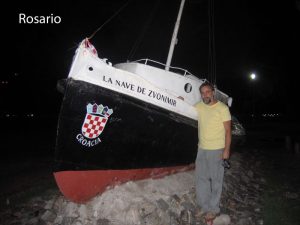 Goran Borčić from Split (director of the Civic Museum of Split)

One of the oldest Croatian settlements in Argentina is Villa Mugueta, where about 2550 inhabitants live. At the very entrance to the city is a monument with three flags, and one of which is Croatian. Croats’ presence in this place is very noticeable because they have been here since the 19th century. They gather in the society Sociedad Croata de Socorros Mutuos (Croatian Beneficial Society), founded in 1925. 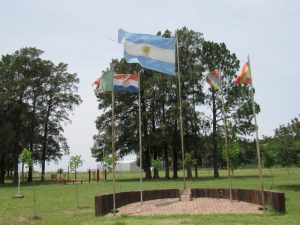 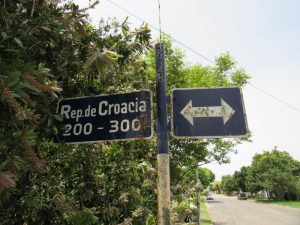 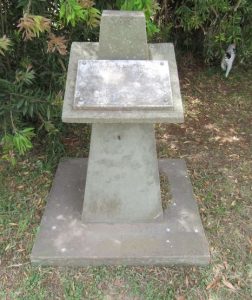 Today, the society is called the Croatian Sports and Cultural Society. Calle croacia – Croatian Street is also located there, and one of the mayors in recent history was Esteban Bogdanich, originally from Stari Grad. 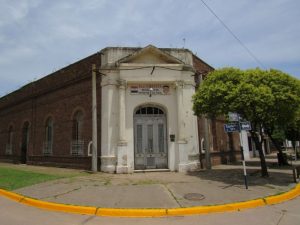 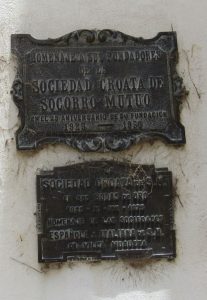 An interesting part of Villa Mugueta is Our Lady of Health’s statue, the only one in Argentina because it is not traditional Argentinian worship. However, in 1927, Stipe Gamulin from Jelsa came there, and before his arrival, his fellow countrymen from Villa Mugueta wrote to him to bring a statue of the Lady. 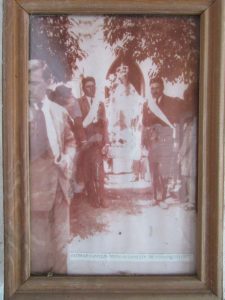 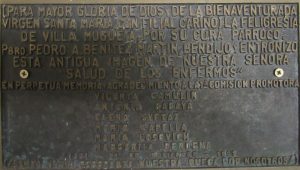 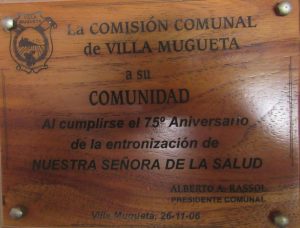 In the 1960s, a little girl became seriously ill. Her mother vowed to Our Lady of Health that she would give her, her little girl’s hair if she recovered, and that is what happened. The girl recovered, and the Lady’s statue was given natural hair. Many years later, when the little girl became a woman and married, she cut her then long curly hair and put it on the Lady’s statue again. Thus the only Lady of Health in Argentina has the natural curls of a grateful devotee. 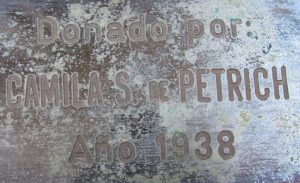 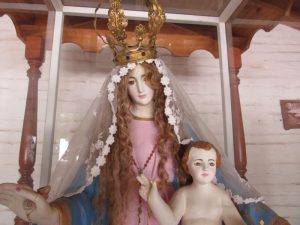 In the nearby Bigand, Kokic, Jakas, and Ivanisevic have wheat processing plants. Ten years ago, this company was presented at the Dalmatian Chamber of Commerce in Split.

A significant Croatian community lives in Chovet, a town with about 2,500 inhabitants, located about 400 km from Buenos Aires. The town was founded in 1923, and the estimate is that 50% of the population is of Croatian origin. The beginning of Croats’ arrival in Chovet is connected to the first years of building the city and when 7,000 Croats came to Argentina every year. The Croatian community in Chovet is homogeneous, but they do not have a Croatian society, and they gather in a church dedicated to St. Ante Padovanski. The church was built from 1936 to 1940 thanks to the priest Leonard Ruskovic, followed by Lino Pedisic and Amadeo Di Illio. The stained glass in the church is dedicated to them. 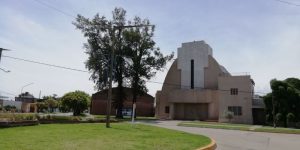 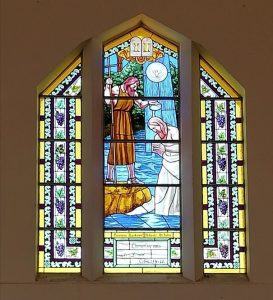 The Croatian language is not used often; however, it is somewhat preserved. The population is engaged in agriculture and also sports development. Soccer players Ivan Gabrić (his cousin is Tonči Gabrić, Hajduk’s goalkeeper), Lucijano Pocrnjić, and volleyball player Federico Franetović are from Chovet.

There is also Calle Croacia – Croatian Street in Chovet and a flying Croatian flag at the entrance to the city. 80% of gravestones at the local cemetery have Croatian surnames.

In 2019, Chovet City Council honored me with an award for my work with expatriates, which beautifully rewarded my preceding work. 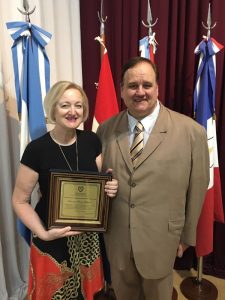 Not far from Chovet is Venado Tuerto, with 80,000 residents, founded in the late 19th century. There is another Calle Croacia – Croatian street there as well. The Croatian community gathers in Matea and Dominga Kujundžić families’ house, where they offer a Croatian language course (Escuela de Idioma Croata). As this area is highly agricultural, there is an Agricultural School, at which the Croatian flag can be seen at the entrance. The reason for this is that the school is twinned with the agricultural secondary school Braća Radić in Kaštel Štafilić. The deputy director is Jose Ban, Argentinian of Croatian origin. 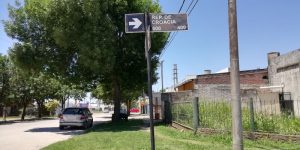 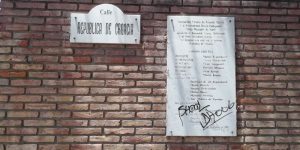 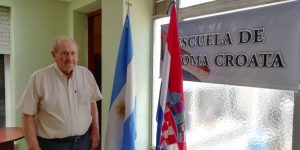 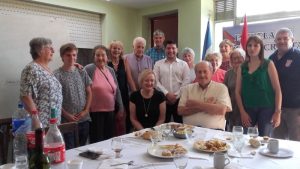 Mateo Kujundzic and gathering at his home 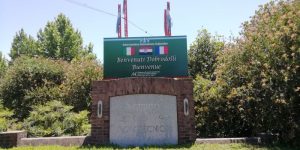 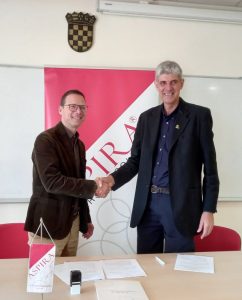 Sponsored by: Juroslav Buljubašić, Honorary Consul of Chile in Split