GLAVINIĆ PANGRAZIO, a story of comings and goings

My name is Mariana Glavinich Luraschi, I was born in Asunción, capital of Paraguay, I am 31 years old and I am an architect. My parents are Gustavo and Laura, with whom I share a profession. Also, I have a younger brother named Gustavo José and a dog named Mila.

From a very young age I was curious about migrations and the history of people who had to leave their country of origin, their families and their loved ones (the vast majority knowing that a reunion would be impossible), since all my great-grandparents emigrated to Paraguay, from some European country – Croatia, Italy or Spain.

Both parents of my paternal grandfather, Fortunato Víctor Glavinich Pangrazio, were Croats who immigrated to Paraguay. His father Srećko, who in Paraguay was renamed Fortunato, was born in the city of Makarska in 1872. He was the first and only son of Josip (José Glavinić) and File (Filomena Rafanelli). Josip was dedicated to stone construction. The bell tower of the Igrane Church, very close to Makarska, was built by him. Srećko was only able to go to school until the second grade. His days in Makarska were spent building wooden boats with his friends, and he threw himself into the sea, that turquoise blue sea that bathes the shores of the Makarska Riviera. So much so that at the age of 10 he suffered his first shipwreck.

Srećko emigrated to Paraguay towards the end of 1890 in search of work, in order to help his parents and his 3 sisters. When he shared the idea of ​​emigrating at home, his family disagree. Faced with the refusal of his parents, without having the necessary money to buy a ticket, Srećko slipped through the crowd and, without saying goodbye to him, boarded the stowaway boat. Of course, later on during the voyage he was discovered and put to work as the ship’s assistant engineer. Everything he learned on that trip was useful for later working as a marine engineer in the shipping company of Croatian from Peljesac Nikola Mihanović who lived in Buenos Aires.

Meanwhile, my great-grandmother Paulina was born in Cavtat in 1887. Towards the end of 1800 it is well known that a plague wreaked havoc on the population and many people died. Phylloxera attached vineyards and so, in 1894, her parents, Antonio Pangrazio and Amalia Filippi, decided to emigrate to South America together with their 3 small children. Antonio’s brother, Natalio, his wife and his children also emigrated with them.

Paulina and Srećko met in Paraguay and married in 1917, in Asunción. Soon they had to go to the Paraguayan Chaco, to Puerto Pinasco, where Fortunato worked in the tannin factory. There they had their first child, José. Then they returned to Asunción, where Marcos, Antonio and Fortunato, my grandfather, were born. 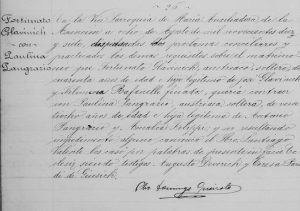 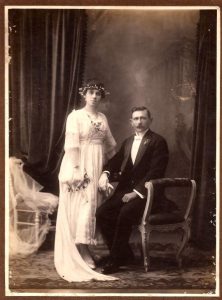 Although Srećko had a very basic education, he was a hard-working man, and he always kept in mind his family that he left behind in Makarska, to whom he used to send help. His sisters kept sending him letters and photos of the family so that he could get to know them and be aware of how his nephews were growing. In addition to working in the tannin factory and as a marine engineer at the Mihanović Company, Srećko had his own warehouse, located in the center of Asunción. 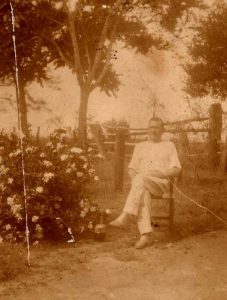 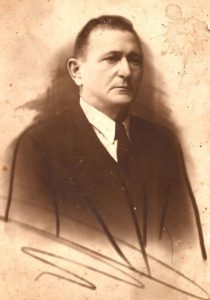 Srećko and obituary that his friends published for him

Srećko passed away after a long and painful illness in 1946, ten years before my father was born. After that communication with the family in Croatia was lost. However, Paulina never forgot the Croatian language. She frequently visited the Congregation of the Vincentian Sisters from Zagreb, where she was spending long hours speaking Croatian with Sister Slava Vedrina. Grandma Paulina did not celebrate her birthday, she celebrated her “imendan”, her Saint’s day, as it is customary in Croatia. Since I was little, my dad told me that I have the same character as her: strong, tough, but with a noble heart, proud of her family and willing to help her loved ones. 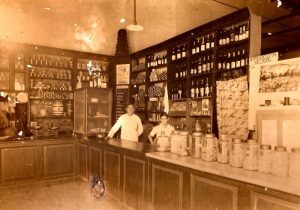 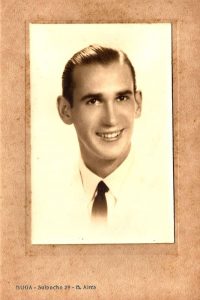 In 1998 my father was part of the Paraguayan-Croatian Chamber of Commerce. They wanted to start commercial and cultural ties between Paraguay and Croatia and thus unite both countries. This is how he had the opportunity to visit Croatia, which until then was a dream for us. I remember asking dad to take me with him, but of course he couldn’t. I cried a lot at the airport and told him that one day I would go to live in Croatia. Dad went to Makarska to ask if there were relatives left but they told him no and he returned to Paraguay very sad, because he had a great longing and expectation for the reunion.

That year the World Cup in France ’98 was played and Dad brought us shirts of the Croatian national team. Mine was number 3, by Šimić, and my brother’s was, of course, number 9 by Davor Šuker. I still remember that my brother and I watched the games with our shirts on. Until the game against Germany came, and we had a German neighbor. When Croatia beat Germany, my brother and I went out on the streets to celebrate, with shirts and the flag.

Our Croatian heritage was always present at home. The traditional fritule were prepared by grandmother Paulina and her sister, Elena. The family dog ​​was named Vuk. To this day, during family gatherings, toasts are made to the unison shout of “Živjeli!”, just as Grandma Paulina and Aunt Elena used to do. Abuela Paulina celebrated Christmas with a lunch, as is the Croatian custom, unlike in Paraguay, where they celebrate with a big dinner on Christmas Eve. Of course, I grew up with “Slatka mala Marijana” playing in the background at every gathering of Croatian descendants we attended with Dad. When I was 6 years old, my brother found out that our surname was changed, and that it was decided that we would sign originally: Glavinić.

Motivated by this curiosity of mine since I was little, wanting to learn the language and culture of my origins, I applied and in 2018 and I was selected for the Croaticum scholarships in Croatia. I decided to study in Split because my great-grandparents were Dalmatians. That semester in Croatia was wonderful, I learned a lot about Croatian history and customs, I traveled around the country and I saw beautiful places. But just like my Dad in 1998, I couldn’t find our family, and that made me very sad.

Just 20 days before I was supposed to return to Paraguay, a person who does genealogies in Makarska helped me and gave me my cousin Mario’s number. I talked to him and told him that I was in Croatia and that we were family. A few hours later I received calls from different numbers, they were my uncles wanting to meet me and talk to me. After so many years we had the opportunity to meet! Those days were so exciting for me! My family welcomed me as if we had never been apart. And in a way, it was a way of “closing the circle”. I am sure that Srećko ‘’returned’’ to Makarska with me and was also present in every hug I received, which in some way was also his reunion with his family. My family was very happy when they found out that I wanted to live in Croatia. In addition to the great affection with which they received me, I always remember the words of my uncle Marko: “You have the same eyes, the same look as my grandmother Luiđa (sister of my great-grandfather Srećko) and the same hair. When you look at me, I see her her looking at me again like when I was a child”.

I returned to Croatia in 2019 to continue with language and culture courses, and officially decided to move to Split a year later. I work in an architecture office in Split. And, moved by that love for this country, and in tribute to Srećko and Paulina who left me the incalculable heritage of being part of it, I applied for Croatian citizenship, and today I can also say that I am proudly Croatian.