José (Josip) Pasinović was born on February 26, 1860 in Dobrota, Kotor. His parents were Ivan Pasinović and his mother Agnese Radonicić. Both Agnese and Ivan belonged to distinguished and tapered Croatian families from Boka kotorska. José Pasinović studied foreign trade in Trieste and from a young age showed great intellectual ability and talent of learning languages. He spoke and wrote native Croatian, Italian, Spanish, French and German.

His relatives were members of the Bokeljska mornarica (Boka Navy), a Croatian brotherhood of sailors from Kotor. In this brotherhood the socio-humanitarian factor stood out, especially helping the poor and sick. One of its components was the military-naval. The aim was to train the members of the Navy so that they will carry out their functions of defending territorial waters. 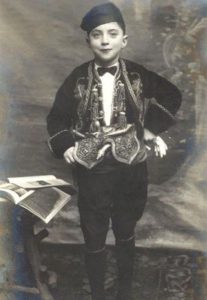 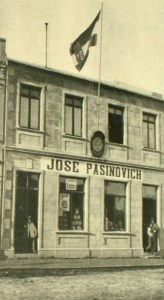 My grandmother told me that on weekends the family would get together to sing typical Croatian songs and taste meals that her mother, together with her friends from the community, prepared.

José would quietly retire to chat about political issues while Marta and her daughter enjoyed a rich sarma (cabbage rolls) with friends and good music. At the end it was time to eat some delicious kolači (pastries).

In 1929 José, Marta and María Josefina boarded the Comodoro Rivadavia ship and emigrated to Argentina where they settled in a boarding house located in the Almagro neighborhood of Buenos Aires.

The days in Buenos Aires passed quietly, enjoying going to the theater and doing cultural outings that reminded them of Croatia.

In Buenos Aires Pasinović was looking for that piece of Croatian culture in every corner of the city, getting together with illustrious Croatian citizens of his stature.

With them he discussed politics and the feeling that identified him. Years passed and he passed away. The remains of José Pasinović were cremated in the Chacarita cemetery.

María Josefina married Jesús Gómez and from that marriage my mother, Silvia Patricia Gómez and my aunt Adriana Gómez were born.

Later, together with my mother, we went to the Argentine Atlantic coast and threw the ashes of José and Marta Pasinović into the sea.

Since my young age I was in contact with Croatian customs as well as with the language. My grandmother always told me about the events she attended in the Croatian community in Chile and her active and committed participation in the Chilean community. She, along with her mother, met on weekends to sing and eat typical dishes with the Croatians from Magellan. At the same time, my mother, since I was little, motivated me to participate in the Croatian community of Buenos Aires, which I currently attend every weekend.

I play in the tambura group as well as in the dance group, Igra Kolo.

The Croatian sentiment in my family has been going on since my great-great-grandfather to my generation.

My great-great-grandfather with his sentiments, support and solidarity with the Croats left a very important imprint on my family that my great-grandmother and my grandmother continued to preserve over the years.

I remember when I was a little girl I listened to my grandmother speak Croatian with my mom at the table. My mother sang Croatian lullabies to me, and on weekends we would get together with the kids from the community to cook eels.

I will never forget those times and will continue to celebrate the Croatian sentiment in Argentina.