La Paz is the capital of the province of the same name and the seat of the government of Bolivia. It is located in the valley of the river Rio de la Paz at 3658 meters above sea level, so it is among the highest cities in the world. It has almost 800,000 inhabitants, half of whom are Indians. In the 1930s, according to Ivan Lupis, a small Croatian community lived there. He mentioned Ivan Dubravčić and Nikola Sinovčić from the island of Brač, and Nikola Vučić from Selca, Brač, also lived there. Later we find Mate Martinić, H. Jeliničić, Jure Kuljiš and Marko Martinić mentioned in the ”Yugoslav Gazette” from Santiago de Chile in July 1935. In 1940, the same newspaper wrote about the Yugoslav Club in La Paz, founded in 1938, whose first president was Ivica Kršul. After two years, he was replaced by Pavao Dabetić, whose deputy was Jure Kuljiš, and whose secretary was Božo Eterović. 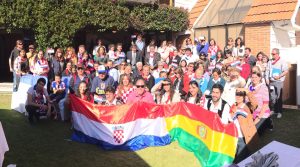