My great – grandfather Vicko Batoš came to Argentina in 1932. This is a somewhat particular story, since he had some luck, Divine help or destiny. He was born in a small village called Pitve, on the island of Hvar, on May 30, 1907. He had four younger brothers, twin sisters, with whom he maintained contact through letters and who followed his same course to Argentina. In the family we believe that his decision was not easy at all, he always longed for his homeland, so much so that he remained silent for practically his entire stay.

According to my grandmother’s oral testimonies, the family received a letter of the death of his father. Without hesitation, his mother sent him, just as he was, with what he was wearing, to somewhere in South America. We don’t know much about this. There is no data registered in the Center for Latin American Migratory Studies or anything of a legal nature. What little we know is from another Croatian family, whom he apparently met in the port of Buenos Aires.

Without a peso and with the little he was wearing, without papers, that is, illegally, he left the port of Trieste, hidden in one of the rescue boats, feeding on the crumbs people left behind, trying not to be found. He had finally made it and arrived at the Argentine Customs. A long line awaited him. They had already deported several who came illegally. In front of him was a family. Entering like this was easier, since it was one of the main objectives of the immigration policy of the time. For this reason, it had not cost them much to enter the country. These people were surnamed Mimica. Apparently, when he was asked to show the papers, silence was what invaded the moment and he had nothing to show. The father of the Mimica family, whose name we do not know, nor do we know if he knew it, instantly acted. He took Vicko by his arm, bravely telling the customs officers that he was coming with them, as a part of his family. Leaving there, among the crowd and the immensity that was the port that day, both took different directions without even greeting each other.

Upon entering Argentine territory, Vicente found a job in a small town called San Eduardo. Precisely, in this region belonging to the south of Santa fe province there are several communities of Croatian immigrants, so adaptation was quite simple for him. His father had taught him some farm work with which he could support himself.

He passed the time, and was adapting to the Argentine rural life. Little by little he was saving some money to be able to bring his brothers from Hvar, while he continued to maintain contact with his two sisters, who wrote to him monthly. However, unbeknownst to him, there was a bond that had not yet been closed.

One day, one of those like so many others, the boss had sent him to fence the field. Laying out the poles, he met a neighbor from the area who, by coincidence, was a compatriot. Speaking in their Croatian dialect, they quickly began to understand each other and each shared their stories. And the man, he showed himself tall and rode a horse. In the middle of the talk, he began to recount his arrival in Argentina. He said that when he entered Buenos Aires he had been struck by a tall but very thin boy, who could practically not stand up. He had seen how the commissioners had begun to rebuke him by constantly pointing their fingers at him. Then he had taken him by the arm telling the customs officers that this child was with them. And meditating he said: “I would have liked to know what happened to him”. When the man riding the horse looked down, he saw my great-grandfather in tears. And extending his hand in greeting, he told her: “That skinny boy was me.” Quickly, he couldn’t resist and got down to give him a big hug.

Over time, Vicente managed to form a family, together with another Croatian descendant, named Juana Tomisich (Tomičić). They managed to raise five children. And on top of that, he achieved his goal of bringing his two brothers. One of them went to live in Firmat, from time to time he went to visit him. The other, named Grgur, had gotten a job as an onion harvester in Mendoza. But it was very hard for him, as well as the pay. The hours under the sun caused him to contract an illness, from which he could not be cured and finally died. Despite the distance from San Eduardo to Mendoza, as his good older brother, Vicko had gone to take care of him. He had paid for all of his treatment. When he returned, he also brought his brother so that he could have a decent burial in San Eduardo. Perhaps, so that they were close. The vicissitudes of life were making it harder and harder.

Vicko is remembered today as a man who, despite the silence, always had a smile. As a person who loved fish, more so if it was from the sea and who took a long time to eat. Surely he was much more than that, surely his life was for the family and for the homeland from which he had moved away. He was the nono Batos to everyone, always cheerful, always alive and always attentive. For this reason I believe that the main Croatian tradition that he bequeathed us is the family, that fighting for the family is worth it, and that as the Croatian phrase “krv nije voda” means ‘’blood is not water’’. Blood is, no doubt, thicker than water. 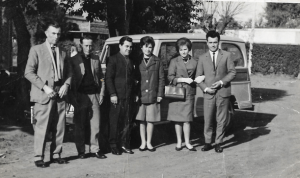