When a member of the lodge died, the membership was expected to attend the funeral. The night before the funeral, they would bring the deceased to his home for the last time. Friends and lodge members came to the wake, which lasted all night long. The next day it was a very touching thing to watch all the members of the lodge, with great dignity, pomp and ceremony, march in front of the horse drawn hearse, and the band with all its golden braid, leading them.

This sometimes covered a great distance, as when Stephen Babare, who died in 1910, lived at North 32nd and White Street. The members of the lodge marched from there to St. Patrick Church for a Requiem High Mass. After mass they would again march, with the same dignity, and the band leading, to South 17th and Jefferson Avenue. Here they would all line up on both sides of the street, and as the horse drawn hearse and mourners went by, on the way to the cemetery, the men would take their derby hats off and place them over their heart, while the band played, “Nearer My God to Thee”.

Matt Cuculich was the last member of the lodge to be buried with custom, in 1915. 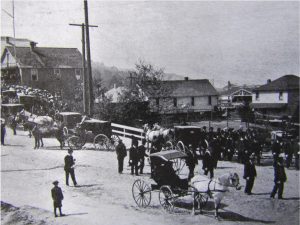