Oruro is located in the highlands of Bolivia, at 3,700 meters above sea level, halfway between Sucre and La Paz, and has a population of just under 300,000. Oruro is a railway junction and the center of large mines, so it also attracted Croats in search of work. A large part of them came from the islands of Vis, Hvar and Brač after 1890. Jakov Sabioncello and Jere Janković from Nerežišća are mentioned among the first Brač residents in Oruro, who came there from the Chilean city of Antofagasta. They were followed by the Franičević brothers, Marko Pavišić, Andrija Stipanović, Nikola Mladineo, Ivan B. Dubravčić, Marijan Harašić, Juraj Janković, Ivan Gardilčić, Franulić and Papić. They were mostly engaged in trade, so although many of these trading companies collapsed after the First World War, in the 1930s we still find Croatian merchants in Oruro. They were: Marko Baković, Marko Defilipis, A. Nigojević, J. Restović, brothers Marijan and Ivan Harašić, Harašić and Pavišić Company, Petar Drpić, Josip Petricio, Juraj Cvitanić, Petar Fornese, Meštrović, Nikola Mihaić, Tomo Martinić, Šimun Palaveršić, Juraj and Ivan Papić, Marijan Franulić, Mato Acalinivić, Dinko, Frane, Jerko, Lucija and Marko Baković, Jerka Defilipis, Anton Jutronić, Vincent Orlandini and Šimun Palaveršić.

Special mention should be made of Marko Grubišić, agronomy engineer, wholesaler and industrialist, who invented a medicine for the treatment of tuberculosis and impotence. He made it from flour and two medicinal plants, and called it “Andean medicine”. He sent it for examination to many American hospitals and institutes, and even to Zagreb.

Ivan Lupis Vukić visited Bolivia in the 1930s, because he lived in Buenos Aires for a couple of years. According to his writings, the people of Brač imported goods from the USA and Europe, especially food, porcelain and drinks, and Pelinkovac, Maraschino and Prosecco from the old region.

In addition to trade, the people of Brač were also engaged in mining, in which Ivan Dubravčić from Nerežišće, co-owner of “The Bolivian Mine Company”, which he founded with capitalists from New York, was the leader. Apart from him, there were other mining entrepreneurs such as Pavle Radić, Ivan Restović, Ante Kirigin, Toma Vidović, Nikola Vrsalović, Vicko Orlandini and Ivan Ostojić. The largest asbestos deposit in Bolivia was opened by Antun Ljubetić from Sutivan.

A group of settlers, including Santiago (Jakov) Franičević, brothers Juan (Ivan), Domingo (Nedjeljko) and Francisco (Frane) Garafulić, Juan (Ivan) Dubravčić, Marcos Eterović, Juan (Ivan) Franjola, Fabian Jeličić, Andrija Kukoč and Mate Sapunar, founded the first society in Oruro in 1912, which was called “Slavic Trade and Benevolent Society”. Their participation in the social, economic, cultural and political life of Oruro was very influential, which can be seen from the fact that they were engaged in numerous activities in the mining industry and trade. The ironworks and warehouses they managed, as well as the famous Harašić chocolate factory, are woven into the economic history of the city and the building of true empires. 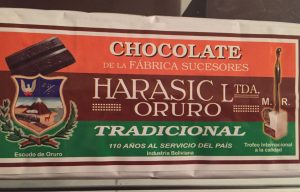 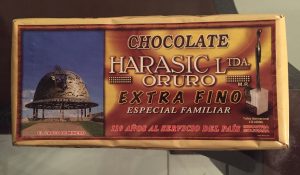 The first chocolate produced in Bolivia in 1909

In its hundred years of activity, the society collected books for a small library and archive, and the fact that they were not lost should be especially thanked to Dr. Gonzalo Nigoević and his daughter Danitza. The statute and founding act of the company, minutes, bookkeeping documents (accounts, invoices for the purchase and sale of minerals, balance sheets), correspondence of the company with colleagues in Yugoslavia and Chile, documents of the Red Cross and other materials from 1912 to 1985 have been preserved. Then the company’s property was sold, and thanks to Dr. Nigoević and his daughter, the archive and library of old books printed in the Croatian language were saved, which are now located in the premises of the “Club Social Croata”.

After the ”Benevolent Society”, the “Bomba Slava Numero 1 de Oruro” firefighting company was founded in 1914, the third in the country’s history. The immediate reason was that the warehouse of Marcos Bacovic (Baković), a dealer in fabrics, flour and groceries, burned down in a fire, and the neighbors could not do anything because of the lack of water. Then, in 1916, a branch of the ”Yugoslav National Defense” named “Ivan Mažuranić” was founded.
The Croats in Oruro built a cemetery in 1916, which is one of the most beautiful in South America and is under the protection of UNESCO. Since a large part of the settlers of that time were from the island of Brač, they knew how to work with stone, so the cemetery is decorated with marble mausoleums and tombs of exceptional beauty. 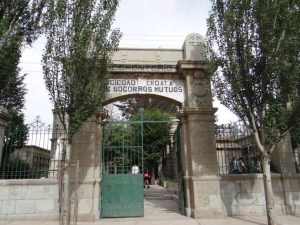