The Brljević family from the river Neretva in New Zealand

Ante Brljević was born on June 10, 1885 in Momići, a village in Desne parish. His parents were Kata Barbir and Ivan Brljević. His brother Mate moved to New Zealand already in 1905. Mate worked in the settlement of Wade, which later changed its name to Silverdale. In 1910 he applied for New Zealand citizenship, which was granted after a few months. After that, he returned to his native village to take his younger brother Ante. The two brothers sailed into the port of Auckland on March 26th 1911th aboard ‘’Mahone’’.

The brothers did hard work together for a very short time because Mate quickly returned to his homeland where he participated in the World War I and later got married and had children. It is interesting that Mate’s grandchildren Ognjen and Neren Mišur moved to New Zealand at the end of the 20th century, and their mother Fila Mišur (née Brljević), Mate’s daughter, joined them near the end of her life in Auckland, where she died.

Ante Brljević stayed in New Zealand and continued to do hard work all over the country. Through a friend from the island of Hvar, he began to correspond with his sister, Katica Godinović from Bogomolje. She moved in with Ante and they got married in 1925. Ante supported his family by working in the kauri fields. They had six children and twenty grandchildren. They settled in the extreme north of the island in Kaitaia. Ante died in 1964 and was buried in the local cemetery. 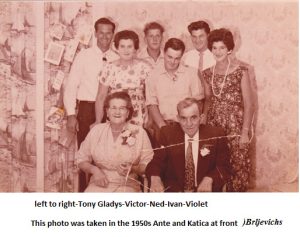 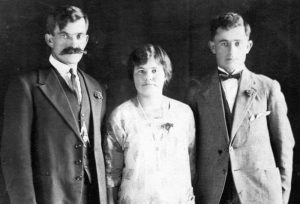 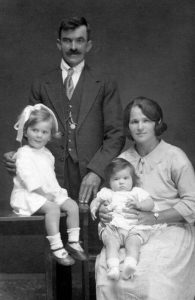 Ante Brljević with his wife and children