The Budrovich Family from the Province of Santa Fe

The surname Budrović has been originally from Vrbanj (Hvar), since the 15th century. It is probably a hypocoristic of the name Budimir or Budislav.

My ancestors were born in Velo Grablje (Hvar). Nikola Budrović states that in the year 1469 his ancestors raised cattle there.

Josip Budrović was my great-great-grandfather, one of the youngest of 8 siblings, who was born on September 26, 1852 in Velo Grablje. He was the son of Juraj Budrović and Petra Zaninović, the grandson of Jakov Budrović and Šima Šeperica.

On November 12, 1878 he married Magdalena Tudor, a 21-year-old girl from Malo Grablje, daughter of Dinko Tudor and Katarina Tudor. They are all Tudors in Malo Grablje.

Their first child was born on June 23, 1880, and was named Juraj in honor of his grandfather. Unfortunately, he died on August 14, 1881 when Magdalena was already pregnant with her second son, who was born on December 5, 1881 and to respect tradition they also called him Juraj. He died in 1898 at the age of 16.

Difficult times were in the old continent, many diseases, bad political decisions and the American phylloxera wreaking havoc on the wine, so the family had to try their luck in America.

Josip packed their luggage with what little he had, leaving behind his roots, his family, with his head bowed and his pride aside. He took Dinko, his son of 19 with him.

They arrived in Buenos Aires on June 1, 1902. After being quarantined at the Hotel de los Inmigrantes, they continued their course and settled in the town of Villada in the Province of Santa Fe.

Dinko, with his name translated as Domingo, stayed in Villada while his father returned to the island of Hvar to look for his wife and his other children. The outlook on the island was not encouraging, his wife Magdalena had died on August 5, 1905 from a heart attack and his children were in terrible condition, malnourished.

In 1906, Josip and his children Ivana (Juana), Jakov (Santiago), Kata (Catalina) and Marija (María) arrived in the port of Buenos Aires, heading to Villada where their older brother, Domingo, was waiting for them.

With the passage of time everything seemed to settle, an unknown language, but plenty of work and the desire to progress. On June 28, 1913, fate united my great-grandfather Santiago Budrovich in marriage with María Kovacevich, from Stari Grad (Hvar), practically neighbors. Marija was the daughter of Šimun Kovacevich and Katarina Šoljan. Her older brother, Vinko or Vicente, married Maria Budrovich and her sister Šima or Simona Kovacevich married Domingo Budrovich. 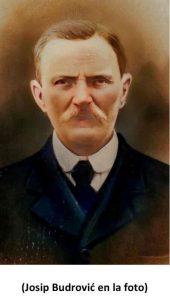 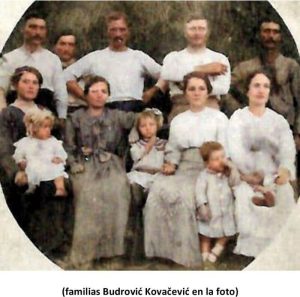 A worn-out Josip Budrović died on December 5, 1919 in the city of Rosario, Santa Fe, at the age of 67, due to prostate cancer.

Conflicts had continued in the old continent, so the young Luka and Stjepan Budrović arrived in Villada, our distant cousins, from the Budrović Lukini branch, leaving a large family in Grablje that today lives in the town of Hvar.

The Budrovich Kovacevich families lease a field in Chañar Ladeado, a small town in the south of Santa Fe, 60 kilometers from Villada where they settled permanently, currently most of the descendants live there.