It is an immense pleasure to take advantage of this opportunity, to invite you to travel through the magical story about a peculiar merchant. The impulse of my chest, obtains reliefed by letting out the stored content through stories told by my mother Patricia Avila Kuljiš, intense anecdotes shared by my grandmother and great-uncles, teachings transmitted by uncles or cousins, about “Papa Jorge” and his journey from Croatia to Bolivia. 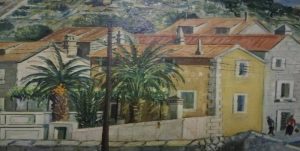 That cute little house that stands out among those on the block for its peculiar yellow, is the home where George Kuljiš (originally Juraj Kuljiš) was born, on February 8, 1889. Those beautiful palm trees and the mountain in the background, give us signs to determine that it is the beautiful and small Island of Vis in Croatia. The fact that I, his great-grandson who never met him in person, write this story, makes me understand that Papa George was raised in a home full of love and values ​​that are sacredly transmitted and treasured from generation to generation. As a child I was told that he was a very strong and kind gentleman. He was of the Catholic religion, was 1.74 meters tall, had brown hair, impeccable and elegant looks, blue eyes and a bushy mustache worthy of a movie star of the time. He was literally a man of the world, possessing passports from the Austro-Hungarian Empire, Yugoslavia, Croatia, Chile and Bolivia.

As I understand it, a teenage George was in a crisis because he failed the year and telling his parents (Rade and Marija) that news would mean death. Ingenuity, a spirit of adventure and a pound sterling would be a combination that would change his life forever. Shutting up the bad news, he decided to take a boat trip as far away as possible. The destination was another continent and being more specific, the new home would be Chile in South America.

Fortunately for our Papa George, his brother Santiago was working at the Kuljiš hotel in the Chilean city of Iquique. However, the Croatian merchant would encounter a thousand and one obstacles along the way that would forge his character and destiny. Let’s start by considering that he had no knowledge of the Spanish language, nor economic resources, he did not have his parents (who must have been immensely worried to the point that the postponement of the year would no longer mean much in this context), friends, culture or educational facilities, those that we enjoy in most of the globalized world that we have today. 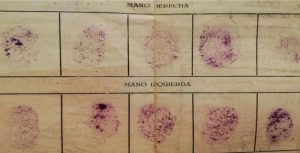 Reviewing the clues like in a detective movie, I found gems like Papa George’s fingerprint samples, which were part of a document to be able to travel to Bolivia. Although he found a job on the Arica, Chile – La Paz, Bolivia railroad, it seems that the adventurous spirit made a call to get to know this new continent in greater depth.

Bolivia would be the definitive home. Bolivia would be the unique space where Bolivian and Croatian customs would have a fusion, it would be the home of love and fruits, it would be the site of the greatest failures and glories of his life. The love of his life would be Rosa Meruvia from Cochabamba, better known as “Mamarosa” (she did meet me as a baby and her love seems to have no expiration date according to what I feel so far). This peculiar love reached the point that Mamarosa traveled to Buenos Aires, Argentina, to take cooking classes with the famous “Doña Petrona”. Those classes contained Croatian food lessons, which would help Papa George offset the pain of missing Croatia and his parents. The fruits of that love were Militza, Danilo, Ivanko and Dolly (My grandmother). From what I understood, Papa George made every human effort so that his children fulfill their dreams in life and be happy in the activity and place they choose. It seems that his wish was for his family to be prosperous, full of love and values, just as I imagine his home on Vis, Croatia was.

The economic and business situation in Bolivia was not the most favorable, however it was a sea of ​​opportunities for those who had faith and vision. George analyzed that the beer producing companies in La Paz-Bolivia, had problems to stock up on glass bottles to be able to complete their products. He recalled that on the beaches of Chile, there were several empty glass bottles that other people threw on the sand. He saw beyond the obvious and determined that it would be a great business opportunity to take these bottles to Bolivia to sell them to beer-producing companies (he would clean the beaches in the process). These bottles were transported on floats pulled by donkeys. You have to imagine how long each trip took and the difficulties of carrying out a task of that magnitude. They say that once a thunderbolt killed a burrito that was helping to transport the bottles. 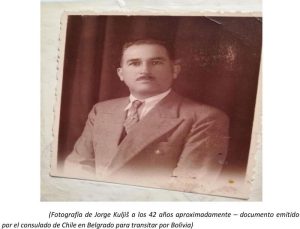 Other entrepreneurship was to trade skins from Bolivia to other countries in Latin America, Europe and the USA. He also imported furs and other products from those countries to Bolivia. He built a rental house where he also lived with his family and which is now considered heritage of the city of La Paz. This blessed neighborhood-style house with European architecture is Pasaje Kuljiš (currently located between Genaro Sanjinéz and Comercio streets in the old town and very close to Plaza Murillo). That Passage also served to shelter representatives of Yugoslavia on occasion and was a point of sale for the products with which Jorge worked.

He bought a piece of land in the Bajo-Seguencoma area of ​​the city of La Paz. Because this area has a more valley-like climate (despite ironically being between 3,000 and 3,500 meters above sea level), it was ideal for planting various vegetables. Among them was the olive tree (so typical of Dalmatia), which at that time did not exist in the city. Currently there is a neighborhood called “Los Olivos”, in honor of the trees planted by Papa George. The harvested vegetables were sold in the center of the city of La Paz.

Due to the revolutions that existed in the 50’s in Bolivia, Jorge suffered a misfortune when he was shot by unscrupulous people who wanted to take his land by force. Despite that setback and almost being paralyzed, Papa George continued thanks to his strong spirit and family love. On the other hand, he helped Croats escape the war who would later find a home in Bolivia. His initiatives helped develop Bolivia’s economy by generating employment and development. He supported the strengthening of relations between Croatia and Bolivia. On one occasion he received a recognition from King Petar for his generosity and transcendental endeavors.

My mother lived with Papa George until she was seven years old. After researching family documents with her, clues, paintings and stories, I found one of the most magical anecdotes that could be the common thread of this great adventure. Papa George gave her and all of her children/grandchildren 1 pound sterling in honor of his journey as a young woman to a distant continent. Jorge had no more assets than this pound then and in turn, this minimal resource and his faith were enough for him to survive the storms and fulfill his dreams in life, building his destiny for good from below, to leave a solid legacy of faith and a will to steel to overcome the shock of immersing yourself in a different culture, leaving everything behind. My mother was in a difficult economic situation at the time of defending her thesis. She said she had to sell her dear pound sterling to cover the costs of the final stage of her studying. After a while my mom became a successful architect. Together with my father Mihael Rojas, she created a company with minimal resources and once again her faith and steely will were the continuation of the initial impulse of that pound sterling (the true value of the pound sterling became a reality). You don’t need all the gold or the optimal conditions to realize your dreams and build a prosperous destiny according to the trader from Croatia. God already gave you the most valuable tools to develop your gifts at birth. 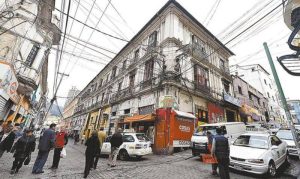 The Kuljis Passage in La Paz

It could be said that nowadays my mother supported a lot to rescue the beloved Kuljiš Passage. I can also testify that Danilo and his love Teresita guard this heritage in a great way and my uncle Andres Kuljiš encourages life inside the passage through his “MIKO Art” museum. When I walk down that central aisle I can’t help but feel an intense energy from my Papa George. We haven’t met physically but I know that when I’m afraid to take a risk that could bring me closer to my dreams, I remember his pound sterling, his faith and will of steel and the fear dissipates. I always appreciate this space where there are materials brought from Europe to make it look like the home where he grew up. I finally understand the reason for those high ceilings, those very different wooden windows, those dreamlike balconies, that functionality so well reflected that welcomes businesses, dreams, art, homes and the active life of La Paz that never sleeps. Now I understand better who we are, where we come from and where we can go if I find you in my heart or if I look at the sky. Dear Great-grandfather Papa George! I will still raise my children with love and values, so that your legacy will pass on to the next generation and so that your stories and Croatian-Bolivian vitality will be an elixir for their souls. So that they feel grateful for their roots, so that they enjoy the blessings of God, so that they can be good men and women. Finally, I will return to Vis and become the naive and adventurous teenager who dreamed of the stars that I only could reach if I decide to take the risk and face my fears.