The small but picturesque village of Grizane (Grižane), in the shadow of the ruins of the old Francopan castle of Vinodol, on the western foothills of the Dinaric Alps, just opposite the Dalmatian coast, on Monday, June 24, 1889, was born Ivan, son of Ivan Lusicic (Lušičić) and Kate Miklic (Miklić). Ivan Jr., who having witnessed the horror of the First World War, was one of those who decided to go in search of new and better horizons and in his early thirties. With the blessing of his parents, he undertook the adventure of his life, in which his cousin Rupert accompanied him. 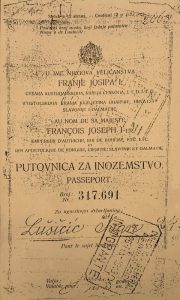 At the beginning of the twenties of the 20th century, they arrived in Buenos Aires and from there they went directly to Concepción, Paraguay capital of the 1st. Department, which was a prosperous commercial port on the Paraguay River. They established business there and in the heart of the city in the Mcal. Estigarribia Street opened “JUAN LUSICHI – STORE AND FERRETERIA’’. They were selling drinks, candies, chocolates and assorted cookies of all kinds from the distributor  ‘’TONISAL of the GRAN MASTER RURAL’’ from Buenos Aires working between Buenos Aires, Argentina, Montevideo, Uruguay and Concepción, Paraguay.

Eventually Juan meets Justa Pastora with whom he unites his life and from whose relationship a total of ten children wre born, who were in order of age:

The oldest of the boys, Juan Eligio, pursued a career in Economics and Accounting, becoming a Doctor of Administration and would achieve notorious social recognition, especially for being one of the main promoters of the famous University Games in our country and also for venturing into historical studies and philosophical thought. He came to have half a dozen college degrees.

On the other hand, daughter Sara, the seventh one, would become a famous volleyball player of the ‘’Club Cedro’’, and who also at the time wore the colors of the Paraguayan National Team of this sport that is so popular in our midst.

The third of the boys, Marcial, distinguished himself as an architect, becoming an accredited designer in our country. Among the buildings erected by him are several of those used by the National Police in Asunción.

Juan (Ivan) Lusichic’s property came to encompass several lots that formed a huge “L” surrounding the ridge that forms the corner, just a hundred meters on one side from the Municipality and the same distance, on the other side, from where raises the Regional Hospital of the IPS. In the same block is the famous Otaño Mansion and the modern Municipal Theater is located on the street that runs behind it. Don Juan, as he was known by his neighbors, managed to collect rainwater that he purified through a complex system of gutters and filters and made it reach a well where little fish abounded. His ingenuity also led him to make his own style tiles for which he created a unique mold that was replicated by the pottery shops in the area.

Inside his house he dedicated himself to painting on the tiles, brightly colored flowers thus creating an interesting mosaic. In his store there were plenty of honey candies that he himself manufactured and marketed, he also prepared and fermented sauerkraut for his own consumption.

Every birthday was a great celebration where Don Juan delivered a box of Swiss chocolates and a porcelain doll or a car as a birthday present to his child.

He had a weakness for good coffee, so he imported a crank grinder with a wooden drawer to grind the beans, which he cared for as his greatest treasure. To alleviate the suffocating Paraguayan heat to which he never got used to, he drank all his drinks with plenty of ice. 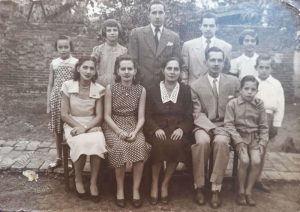 The Lušičić family (Justa and Ivan seated in the middle)

In 1947 a civil-military uprising took place in Concepción against the government of General Higinio Morínigo. In July of that year the city fell into the hands of Morínigo’s forces, who looted shops and stately mansions at close range. Thanks to the fact that Don Juan Lusichic had a foreign nationality, both his person, his wife and his children, in addition to his assets, were respected. The resource used to protect the excesses of the soldiery was to hoist the ensign of the owner’s country of origin in highly visible places. The Lusichics’ property sported a Yugoslavian flag, which almost did not cause a reaction contrary to the desired one. It turned out that the flag of this defunct confederate country, which at the time also included Croatia, was made up of exactly the same colors as our country, but with the colors inverted, leaving blue above, white in the middle and red below. The soldiers, ignorant of this, believed that it was a sign of contempt for the Paraguayan flag and were already preparing to cause damage when an officer arrived who recognized the aforementioned flag of the Balkan country and opportunely prevented the barbarians’ action. Once this agreement was reached that this property should be respected, Don Juan rendered valuable assistance to his community, since he surreptitiously hid in his storehouse all the valuable personal belongings of his neighbors. Once the insane storm of spoils had passed, Don Juan honored the commitment of his friendship, punctiliously returning to their respective owners all the objects that were left in his care. This selfless action, where his life and that of his family were in serious danger, is a perfect example of the noble and generous soul that inhabited him. 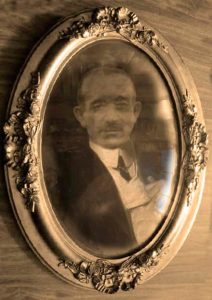 Given the evident deterioration of the prevailing economic situation in Concepción, Don Juan Lusichi tried to expand his business to Buenos Aires, for which he traveled several times to the Argentine capital. But reasons of force majeure prevented him from achieving that desire. He kept his business in Concepción with effort until shortly after death surprised him on Monday, January 29, 1951 when he was only 61 years old. Some of his older children at that time were already studying in Asunción. In the decade that followed his death, practically everyone moved to and around the country’s capital.

Today the Juan Lusichi’s store, which became prominent in Concepción, no longer exists and the property is distributed among several private homes and small businesses. The oldest settlers still remember him with heartfelt longing.

Justa Pastora died several years later, in Asunción. Some of the children formed families and had their own children and until now also grandchildren and great-grandchildren. Of all his children, Juan Esteban and Isabel are the only ones who are still alive.