Every family has its favorite stories. They’re told on a summer camping trip, at Thanksgiving or after Christmas dinner. They start with “Dad, tell us again” or maybe “Mom, remember the time when we went to  . . .”

Like the best stories, these stories grow each time they’re told; something new is remembered, or a favorite shade of color is added.

My family has lots of favorite stories.  I’m one of 26 first cousins, my father had four brothers and one sister, and my grandparents were born in Ireland and Dalmatia -that sliver of land and strand of islands on the east side of the Adriatic Sea.  At various times it’s been known as Croatia or Yugoslavia, Austria, Venice or Pharos.  For the people who come from there, they know it as Dalmatae or Dalmatia. 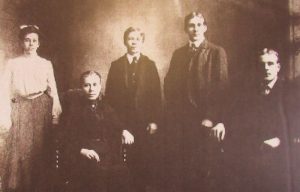 Martin Petrich far right with his mother, brothers and sister

The funny part about our favorite stories is that some of them weren’t ever told to the kids.  They had to learn about their parents and grandparents later, in some cases, after the main characters were dead and gone.  This is one of those stories.

It’s a story about a boat built by my family and launched  in 1937.  It has a claim to fame through an icon of  American literature.

One part of the story begins just after the famous American writer John Steinbeck had published Grapes of Wrath.  It told horror stories of the Depression and the Dust Bowl and the Okies who came west.  It described suffering in America.  While the book was awarded the Pulitzer prize, Steinbeck, the writer, was vilified, accused of being a communist, or worse, a liar.  He wanted to get away from the press and the attention.  So he and his friend, marine biologist Ed Ricketts, chartered a fishing boat in 1940.  After six weeks, he returned from the Sea of Cortez in Mexico and wrote his first nonfiction book.  My cousin says that Steinbeck, in that book, made the Fishing Vessel Western Flyer “the most famous boat in American literature.” 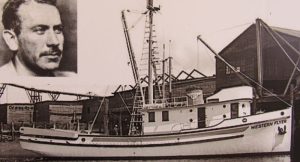 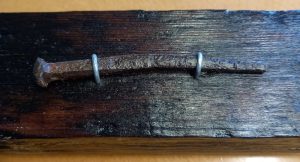 Just a minute, now.  While this story features John Steinbeck and the Western Flyer, it goes back a ways to become one of my family’s stories.  That 77 foot, stinky sardine boat was built by my Grandfather, my father and his brothers.  It was built in Tacoma WA at Western Boat Building Company.

When the buyer of a boat didn’t have enough money to buy it outright, the company kept an interest in the boat and made sure to put “Western” in its name.  There was the Western Ace and the Western King, Western Spirit, Western Pride, Western Clipper and Western Pilot.  This boat when it was launched in 1937 became the Western Flyer.  It was built for my Grandfather’s friend Frank and his son Tony Berry.  Tony had fallen in love with Rosa, a Sicilian girl whose family fished for sardines.  Tony followed her to Monterey.  Some of the Petrich boys joined the crew to deliver the Flyer to Monterey.  They had such a good time in California, finding jobs and living on Cannery  Row that their father had to write them a letter asking them to please come home.  There were more boats to be built! 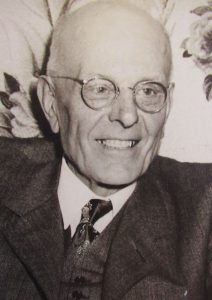 Years passed.  The sardines were fished out.  The fishery collapsed.  The Flyer was sold a couple of times; in the ‘60’s to a fisherman who renamed her the Gemini.  There’s a mariner’s superstition that if you don’t appease the gods and seek permission when you change the name of a boat, bad things will happen.  That’s exactly what happened.

After years of fishing the West Coast and Alaska, her owner lost interest in her.   She needed care. A community group in Salinas failed to raise enough money to buy her.  A developer bought her with plans to cut her up and put parts of her on display in a tourist bar in Monterey.  Before enduring that ultimate insult, she ended up sinking not once, but twice in the Swinomish Slough in La Conner WA.

Then, along came John Gregg in 2011.  John was  a successful businessman with a dream to save the Western Flyer, honor Steinbeck and transform her into a research vessel for young and old to learn about the sea and marine biology.  For nine years, shipwrights of the Port Townsend Cooperative worked to bring her back to life. 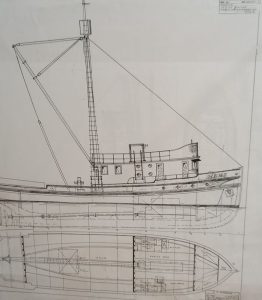 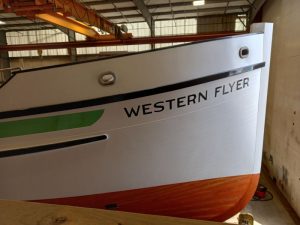 On Wednesday June 30, an auspicious day to launch a boat, the Flyer was ready to be re-named, blessed and launched again.  John Gregg asked the Petrich family to plan the Ceremony.  We jumped at the chance.

I got out all my books on ceremonies and started researching online what it takes to rename a boat.  My cousin Joe volunteered to hold a trident and stand in for Poseidon, the god who must approve the name change.  My cousin Nora agreed to pray to the winds of the four directions for their blessing while my daughter Malory poured the sacrificial red wine grown in the vineyards of Dalmatia into the cups of four other cousins who proceeded to splash that wine on the bow and the hull of the vessel seeking the pleasure of the winds.  The last part of the Ceremony was the part that would have meant the most to our Grandfather M.A.  Last year his great grandson Perry had been ordained a Jesuit Priest and Perry was going to Bless the Western Flyer before it touched the water. 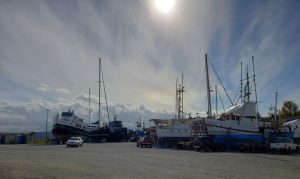 The day was overcast but not rainy.  There is an otherworldliness that comes on those misty days in the north west.  The boat lift met the Flyer nose to nose at the entrance to the shed where she had spent these many years.  The workmen wrapped the straps around her and very slowly she was rolled into the yard.  The path she followed to the water had been  marked off with  yellow tape.  People gathered.  Many of them had worked on her, built her with their own hands and hearts and skills.  Families were there.  The curious.  The young and old.

The Flyer led the way while grownups, babies in arms, and dogs on or off their leashes fell in behind.  It was a procession.  The two leggeds and four leggeds shuffled silently or chatted in hushed voices with one another.  Seagulls swooned and swooped.  It took about 20 minutes to follow the Flyer to the berth where she was suspended 6 inches above the salt water, before being lowered into her natural home.

There were speeches, and applause, entreaties to Poseidon and the four winds, laughter, happiness and a few tears of joy.  The moment for the blessing had come.  Father Perry stood at the front of the crowd, his back to the bow.  He laid the holy water on the pier and reached for the branches of rosemary he was about to use to sprinkle holy water on the Flyer.

Everyone was poised for this special moment.  When suddenly, out of the crowd, headed like a heat seeking missile for the holy water, was the tallest white dog with black spots I’d ever seen. He paused, put his tongue in the bowl and lapped up just the amount of water he wanted.  Everyone burst out in surprise and laughter.  Father Perry called him” the holy dog” and then he proceeded with the blessing.

But the Petrich cousins, wide eyed, were staring at one another.  It was no ordinary big dog drinking the holy water.  It was a Dalmatian in our midst at the blessing.  A Dalmatian from the island where our grandfather was born.  M.A.’s spirit was making itself known and surely, approving the rebirth of his own boat, the Western Flyer. 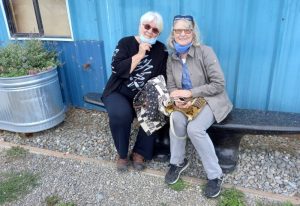 The Petrich cousins, Clare (Martin’s Grandaughter, on left) and Nora